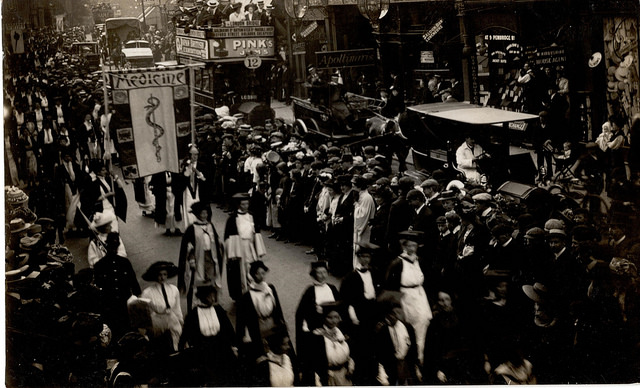 It is puzzling to reflect on what might have lead a twenty seven year old, middle class widow in London in 1891 to move on to a career in nursing and a mission to promote the cause of training midwives.

On 5th April 1891 at 11, Chepstow Villas, Kensington, the census records a young widow, Lelia Parnell, sharing a house with two lodgers, both professional nurses.  She had been a widow for just two days following the death of her husband of some six years.  Lelia Cary (daughter of a Confederate veteran) had grown up in the north west, married her ‘brilliant young scientific chemist’ (described thus in Marland’s account) in Gloucestershire and presumably lived with him in Chester near where he had his business interests in alkali manufactory.   Was it the chance living arrangement with the nurses that helped to form the path of her future life?

Lelia trained on the month long course at the British Lying-in Hospital, St George, and then proved so successful at her general training at the new Hospital for Women that she was appointed Matron at a small hospital in Paulton, Somerset in or about 1893.

Here she was shortly joined by her friend, Alice Gregory, a daughter of the Dean of St Paul’s, who came as a probationer but eventually trained formally as a midwife at a maternity hospital in Clapham, an experience which influenced her views on training and practice in midwifery.  The two women shared their professional interests and a strong Christian faith.

In 1900 Matron Parnell was approached by a local woman, Maud Cashmore, who had found herself too shy to train as a nurse in London but was able to train successfully as a midwife under Lelia’s tutelage.  The three women – Lelia, Alice and Maud – formed a lifelong friendship and working relationship

Alice Gregory made her living as a district midwife but along with Lelia and Maud began to develop her ideas for the training of midwives because their experiences of childbirth led them to believe that more and better trained midwives were required.  In 1903 Alice began a demanding nationwide search through letter writing and meetings for a suitable site.  It was the Bishop of Southwark who introduced her to the Archdeacon of Lewisham  – Charles Ernest Escreet, then in Woolwich, an area of poverty and limited hospital facilities.  Telling her ‘he knew the very spot’, he showed her the Wood Street (now Woodhill) properties on their first meeting and helped persuade the relevant authorities to agree to the scheme.

The hospital with its beds for eight patients was opened on Thursday May 11th 1905 by Princess Christian.  As well as training midwives and admitting women to the hospital for delivery, the hospital was also a base for district midwives.

The training hospital grew from strength to strength and following an amalgamation with the British Lying-in Hospital, moved to new premises in Samuel Street. H.M. Queen Mary opened the building with its 40 beds and staff accommodation in 1922.

The three friends – Lelia Parnell, the first Matron (1864 – 1931); Alice Sophia Gregory, the honorary secretary (1867 – 1946), and Maud Mabel Cashmore, the second Matron (1875 – 1949), – were commemorated in the hospital chapel: ‘A threefold cord is not quickly broken’.  Lelia herself is buried in Charlton Cemetery with the inscription ‘Surge Illuminare’ – Arise! Shine!  They had certainly shone in their chosen profession supporting hundreds of women as they gave birth and making a significant contribution to the development of the training of midwives at a time of transition in the profession.

Family records on Find My Past and Ancestry.co.uk

What are we tweeting?